Posted by Everett C. Tustin at 9:25 AM No comments:

Years ago, our oldest daughter was a runner. She was in first grade. She ran everywhere.
After school she was in a pretty loosely developed track program. The kids circled the school grounds on the sidewalk after the final bell while the teacher put marks on their hand every time they passed her on the playground. They did it every day for about an hour. One day when we picked her up, the teacher told us that our daughter circled the school more times than the other children. 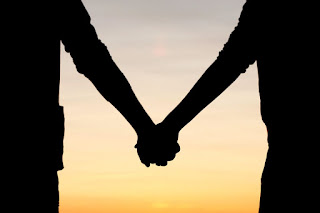 "Okay," we said.
"A lot more times," said the teacher.
"Okay," we said.
Then there was a race scheduled with other area grade schools.
We met in a city park for a one mile run.
Our daughter had been walking around the park with us and a friend of hers from her class. They were aflutter about everything happening around them.
They were holding hands and talking excitedly.
A bit later, the two of them were standing at a starting line with a mob of two or three dozen other kids.
They looked at each other with smiles and then the gun sounded.
Our daughter bolted out in front of the the group and after about 75 yards was in front of the pack by a significant distance.
Then she stopped.
Froze.
Turned around and searched through the others until she found her little friend, raced back against the onrushing tide of runners, grabbed her friend by the hand and then the two ran on together, somewhere in the middle-rear of the pack, but together.
It was incongruent when measured against the concept of "a race".
We knew that and were confused, but at the same time, there was something very right about her
actions.
In another context of course, we were really proud of her choice.
We have to remember that the pathway to healing in racial and cultural divides involves words like
reconciliation and restoration; it is a return path.
All the way back to the beginning, there was a force at work to divide and separate us.
From God.
From each other.
From family.
Selfishness, pride and fear will separate; always.
That theme of broken-ness cuts across all of the history of humanity.
There was a complete Shalom and then there was not. All we have known since the garden in respect to race, culture and family is lesser representations of it. A hint of how it ought to be at times, but only a hint.
We know there to be a way back, but mostly we are bent by our own will to continue forward instead
of turning around.
As though we will find some kind of new formula, fresh understanding or enlightened thought on the horizon; but it's not there.
The answer is in going back, not forward.
Even the word repentance is a return word.
Making space in my mind for a coming home experience.
At the Eastern Gate.
At the foot of the cross.
We were meant to be one.
All of us.
One blood.
One creation.
One humanity.
The answer is in the return.
I believe that if we would just find our brother and sister and join hands, exercise forgiveness and grace, ignore the race going on around us, we will discover it.
The path is overgrown and thorny, but it's there.
He's calling us towards it.
Posted by Everett C. Tustin at 10:15 AM No comments: