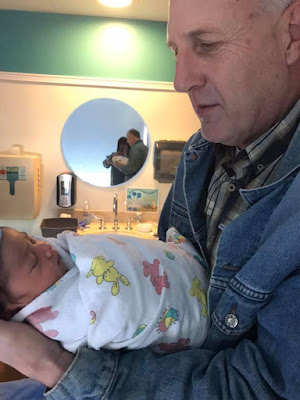 A friend of mine just went home.
At the beginning of the week, Rhonda and I drove to Swedish Hospital to celebrate the birth of a lad whose parents I was privileged to marry a short while ago. His eyes opened to this world for the very first time on Tuesday morning. He is beautiful and sweet and tiny. And his parents shine almost as much as he does.  🙂
In contrast, I just left the house where another closed his eyes to this world for the last time. When he opens them again it will be to a different world.
He was in church last Sunday.
Tired.
Waiting for release.
I have seen him at least once or twice a week for the past several weeks as he wanted to talk to me about many things.
Sometimes we just read the bible together.
Sometimes we discussed what it said.
Sometimes we talked about his antique cars.
Or roller skating.
Or his travels.
Or his cancer.
A couple weeks ago, as I sat down, I asked him how we was, and he said, "I'm doing about as good as I can. I think. I just want to get back to church. But my legs are so wobbly I can't even get to the wheel-chair by myself. Can you help with that?"
I said we would figure out something. And we did. (Thank you, Brian and Stanley). 🙂
Then I said, "How are you with Jesus?"
And he said, "He's closer than ever. Sometimes I can see him right there!" And his voice rose a bit in decibel, and he lifted his shaky right arm, emphatically gesturing to a space maybe two feet in front of him.
"I'm ready to go." he said.
And it wasn't morbid.
It wasn't even depressing.
It was just true.
He was ready to enter into the future that his faith had promised. He had been assured of it's reality by the one he was counting on, and had in fact seen more clearly now as that day grew near. He is home.
Eyes closed.
Eyes opened.