Joy To The World

I don't know if I am good at simplifying things because I am....well, a rather simple person, or if it is some kind of gift from Christ. 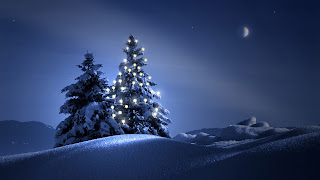 Either way, it doesn't matter to me.  I like it a lot when something becomes less complicated.  It's easier for me to share that way.

When I think of the Christmases that have meant the most to me; the ones which store the most memory-driven smiles, they were de-cluttered Christmases.  They can be summarized in one sentence and my family will know exactly what year I am speaking of.  For instance:

The year there were four-foot snow drifts and the power went out for a week.
The year we drove to and from Phoenix in the LeBaron.
Just my wife and I, (plus a kitten) in frozen, snowy Chicago.
All the presents stolen from the back of a VW squareback, after a foggy drive to Medford.
Two cats for Christmas, (That was nuts!) in a parsonage in Idaho.
Nairobi...our youngest asked for pencils for Christmas...our oldest directed the children's program.
The year of the Charlie Brown tree in Varna.
Three months of snow in Poznan; and the perfect view of fireworks above the city on New Year's Eve.
Completely lost; driving through 6 inches of snow in the little Opel Astra somewhere between Wroclaw and Krakow...

The list above is not complete.  In fact, the more I think about it, pretty much each year has been special, but the best part of each holiday was not the emphasis on the bigger, brighter, louder things, but rather the point where everything slowed down a bit and got smaller; quieter.  We enjoyed the presence of God, (whether we knew that was what was happening at the time or not) and consequently our family also enjoyed each other, in a better, simpler kind of way.

The link below is a testimonial to this thought.  My daughter and son-in-law created the video several years ago.  It was their first Christmas as a family.

(This was the brief summary that leads into the video)

The first year we celebrated Christmas as a family was the close to a rough year.  We had $30 to our name.  In spite of what could have been, It remains one of my fondest memories.  We made a home video that year that I re-watch every Christmas.  It helps me to refocus on the things in this world that mean the absolute most.  Take a deep breath in.  Love each other.  Hold each other.  Repeat.

http://www.whiskeyandhoney.us/journal/2013/12/22/the-thirty-dollar-christmas
Posted by Everett C. Tustin at 11:48 AM No comments:

He's been gone for five years now.
Feels so odd to write that.
One day, I will say, "Dad passed away 20 years ago."
I will be nearly 70 then.

This past Sunday morning I laced on a pair of his shoes that a few months back came into my possession.
We wear the same size shoe.  I don't think I really knew that.  Ten and a half.
I have two pair of his shoes.  Wingtips; a brown pair and a black pair.
Not sure if that is one or two words; wingtips.  I have never owned a pair before.  They were expensive shoes.
That's how Dad did things.  He saved until he could get something well-made; something solid, something that would last.  Then he wore it, or drove it, or used it until it was done; completely.

Both pairs of shoes have these little "risers" tacked to the heel where it had been wore down.  Cobblers did that.  I have never taken a pair of shoes to a cobbler. 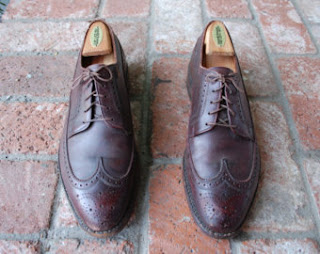 I have some other things that were Dad's.
A few ties.
A shirt.
His wallet.
But for some reason, it is when I put on his shoes, internally,  a "pause" button is pushed, and I will sit on the edge of the bed, chair, or stool...and remember.
And I remember odd things...
The way he shifted gears while driving the pickup.
The songs he used to like to sing.
The stiff way he shot a basketball or swung a baseball bat.
The precision of his technical drawings.
The look in his eyes and the way his mouth curled when he smiled.
But what I remember most is not an image; it is a feeling.  It is the feeling that mostly, Dad always seemed prepared for what was coming next.
There was a plan in place.
He was working the plan that he designed;
that he had thought out to its logical end in advance.
So, in the current moment, he was just following through with his plan.
I would look at him, and say,
"How did you know that would happen?" or
"How did you learn how to do that?"
and he would return that smile and tussle my hair and say,
"Your Grampa taught me."
I wish that I had paid more attention to the things Dad tried to teach me,
but there were times when I thought he didn't know anything about anything that really mattered.
I don't like thinking about that now, but it's true.

We were fortunate enough to enjoy an incredible friendship for the last 25 years or so of his life.  It was a gift from God.  We both found a place in our lives where Christ's Spirit wrangled away our differences and left us with less edginess toward each other.
In the past decade, as I have aged, people have said more and more that I remind them of him.  I used think how terrible that would be.  Now, it is a comfort.
As I walk in these old wingtips, I feel a squeeze in the arch.  The form of them is not contoured to my foot yet, but the size is a fit.
These shoes,
they speak to me of he and I, and our journey together
and separately now.
They are a reminder to me that we have been very different men.  That at times those differences seemed so pronounced that there was little to find in common.
Yet now, I believe we are more the same than I ever conceived we would be,
and I am contented with that thought.