You Have Been So Lost To Me


Rhonda walked into the field offices and greeted Margaret Njuki with a hug.
The embrace was without inhibition; it was kind and sincere.
We had been out of Nairobi for a considerable time and so had Margaret,
but the two women had developed such a close relationship during our time in Kenya...that they were as sisters to each other.

I watched from a short distance as the two women held each other, near tears, for quite some time.  Then as they separated, still holding hands, Margaret said the words that have stayed in both Rhonda's heart and mine, for nearly twenty years now,
"You have been so lost to me." 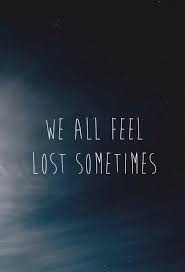 Thomas sat on the carpet with his back to the bed.  I was across from him, with my back to the wall.  He lives in an apartment with three others from South Sudan.  Each has their own bedroom.
He was very somber.  His eyes fell to the floor while he told me the events of the past week.  Typically, his eyes danced with light when we talk, but today...sadness.  There is much violence these days in his homeland.  His adopted brother, John, whom he had helped get through school, helped get a nursing degree, was dead.

A week ago, Thomas was fishing in Alaska.
That's how he makes a living.
That's how he has supported his family in Africa.
That's how he pays his portion of the rent for the apartment in Kent.
That's where he was when he last heard from his brother.
Now he's sending some money home to help with a funeral.
His forehead was against the palm of his hand as he wondered aloud ...
how will John's wife and children survive?

Later that day we prayed together with a handful of others gathered for bible study in another apartment.  In that prayer I believe that there was at least a small bit of release from the pain of being disconnected from his family.

My daughter and her husband arrived at SeaTac airport after a year away teaching ESL courses in Korea.  There were lots of hugs, some tears, (BTW - There is a 15 minute "watching and waiting" video posted to our Facebook page that preserves the moment) but mostly just a lot of joy
as they returned to us after such a long separation.

You have been so lost to me.
This phrase reminds me of all the reunions and disunions of my life.  We were made to live in vital relationship with each other.  Not just with those that we have decided we are "in like" with.

AND Not just with our immediate family.  (Which is not always as easy as it sounds either)  :)

This is odd because we can't really process it at all.
The Father, Son and Spirit live in perfect connected relationship all the time.
There is no setting in which one of them becomes lost to the other.
And somehow Jesus believed that type of relationship was possible for us too.  (heavy sigh)

I have decided that by His strength, and whenever He tells me to,  I will extend a hand.
I am asking anyone else so moved these days, to join me.

Some of the disconnect we experience here, we have no control over.  My friend Thomas has had to work through that recently.  It will be hard.  Yet, I know, that Thomas knows, that between he and his brother John,
one day there will be a reunion!

It is the disconnect that we choose that concerns me the most.

First off there is the disunion from our maker that needs to be sorted out.... can we hear him call out to us, with a broad smile on his face, eyes bright with joy as we walk toward him and receive all the benefits of the relationship that He intended to have with us all along?

And then a fresh breath of release fills our soul that enables us to take the next step.
I have been wronged. 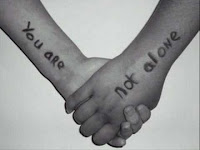 We have all been wronged.
I have wronged others.  There's no way to escape these truths.
Additionally, I am constantly working through stereotypes that separate.  We all are.

Still, I am looking forward to the many moments ahead when I can surround someone with that hope and acceptance that Christ has given me and repeat those same words that He has spoken to me many times, the same words that Margaret spoke to Rhonda without calculating their impact, words that reveal the longing and joy that is part of the reunion...
Mending that which was broken.
Weaving together that which was unraveled.
Shouting out loud because I have been missing a relationship that has left me incomplete up to now...

You have been so lost to me!